How to start a band

By: TheMiketheBlas
There’s no right way to it but there do seem to be some wrong ones. Unless you’re earning a lot of either money or experience, don’t take a lot of abuse. Be clear with the people you’re playing with about your musical intentions. Tell the people in your band that you want to make music your career. Tell them if you’re just doing it for fun as well. Obviously pick people whose musical tastes work well with yours. You don’t have to all be in to the same stuff. Just be open to new ideas and the possibility of widening your musical net. Be able to jam with each other.
Don’t fall into the friend trap. A lot of people never found a good bass or drum player because they always just had somebody fill in to make due or they were friends and they couldn’t figure out how to say, “I think I want to play with other people.” If you’re lucky the person will dive in and learn to be awesome. That’s not my experience. Move on. When you’re 30 you’ll hate yourself.
You’re in a group, how do you want to organize it? Is it a king, a knight and two plebes? A mastermind and his minions? Einstein with an assortment of elderly Germans none of whom you are in any way qualified to judge? A tribe? How many chiefs you got? Be content with whatever you find, or leave it. I hate when I see minions that could be elderly Germans in the right group. I hate when I see a mastermind who didn’t get to take over the world…because he was eating bratwurst or something German like that.
If you’re in it to win it, whatever that may mean, take the business seriously. The most important thing is a product. Do you love your songs? I go to a lot of shows and I’m not judging the performance so much as how into the performance the band seems. “You can’t teach heart,” was what my old football coach used to say. If you don’t love your stuff, it isn’t a product. Sadly, it may not even be a product then. There are a million bands. As a business the cliché is that the nerdiest member of the band takes on any and all business dealings. S/he may not collect the money but s/he books all the shows, makes all the contacts, organizes schedules with the band, etc. It sucks. If you’re this person and you’re decent at your instrument and passionate about music, go out and find two people like you. You’ll be unstoppable.
Remember when your junta is formed, especially if you’re into playing originals, express yourself to the fullest BUT you are a member of a band. I’ve seen people argue over which variation of a part is better and I’ve finally gotten quick to shouting, “Let’s use both!” The beauty and almost spirituality of music and being in a band is it “seems” like you’re in something bigger than yourself. Humble your mind. A mind is a complex and powerful thing. How much greater then when two minds act as one? Three? Don’t even consider four, that’d be just too much sharing. You have a million ideas? Take the best 1,000 and mix them with three other people’s best 1,000. Then take the best 10 out of that, and make an album that will save some souls, drive back the darkness…and maybe even get you laid.
BQS
Posted by Band Members: at 5:07 PM

Glad you're putting these ideas out there for others to absorb.

My man. You're wise beyond your years. Keep reaching out. PEACE! 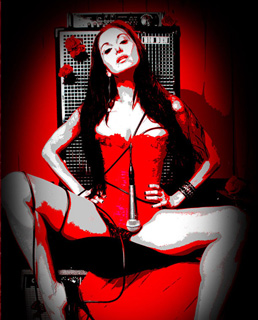